PONTE VEDRA BEACH, Fla. – Blessed by a King and backed by an energetic owner who could find a silver lining in a three-putt, The Yards is a modernized golf club with a creative eye on the future of the game.

Located within a monster Bryson DeChambeau drive of its more famous neighbor, The Players Stadium Course at TPC Sawgrass, home to the PGA Tour’s flagship event, The Yards offers multiple alternatives to the traditional 18-hole route.

Not a problem at The Yards.

In other words, options, options, options. The Yards is home to a 12-hole remodeled course that can play out to 3,695 yards with a par of 44 and a three-hole inner loop of short par 3s around water that are as fun to play as they are challenging.

The club is one of the latest models in a movement to offer golfers – young and old, high-handicapper or scratch, newbies and lifelong players – an alternative to enjoy and grow fond of the game that doesn’t demand six hours of your time.

Thus, variety is the spice of this refashioned track in northeast Florida, from a trio of par 3s that can play anywhere from 45 to 140 yards but are anything but pushovers, to a collection of par 4s that will test your mettle, to two par 5s that offer plenty of testing routes and let the big dog eat.

There’s even a par 3 with a bunker in the middle of the green. “Caution. This is the Black Hole. A surprise awaits you may not escape,” is carved into a rock tee marker at the par-3 fifth hole.

A tee marker at The Yards. (Photo: Steve DiMeglio/Golfweek)

“I think the attention span of the average golfer is waning,” said David Miller, who in 2016 purchased the distressed course with a troubled past marked by legal battles despite never owning a golf course and, as he added, when rounds played in the U.S. were down 10 to 15 percent. But Miller is an entrepreneur whose glass is always more than half full. And he loves his golf – he has a 4,000-square-foot putting and chipping area in his backyard.

The course formerly known as Hidden Oaks, Thousand Oaks, Ponte Vedra Golf and Country Club, and Oak Bridge, originally was designed by Arnold Palmer and built in 1973. Back then it was an 18-hole, par-70 layout. But through the years, the course was often neglected, closed and desperate to attract golfers.

Still, Miller persuaded his current general manager and former PGA Tour professional, Mike Miles, to join him to transform the land. The two – who you would love to meet on the first tee and join at the 19th hole – saw potential and went to work.

There was hesitation, mind you, but Miller plowed ahead by thinking outside the box with the intention of renovating the property into an appealing lure for golfers of all stripes. So he started working on his blueprint, which included designs of putting surfaces drawn out on napkins and holes designed as a result of driving around in a cart with a beer in hand.

The result? Split by a residential street, the club features the refurbished original front nine that plays to a par of 35 that tips out at 3,190 yards and is known as the Front Yard, with six par 3s across the street and beyond the clubhouse that can play to 802 yards and are known as the Back Yard.

“This appeals to the average golfer who gets tired of getting beat up by tough courses. It’s a great beginner’s course, too,” Miller said. “There was a future here.

“To me, it’s like Topgolf meets TPC. It’s like, it feels like two scoops of ice cream. Like, you go to some places and one scoop isn’t enough and three scoops is too much. This feels right. You can get your golf fix in a lot of ways.”

That includes working on your game at the driving range, which was expanded by 40 yards. Two short-game practice areas also are in the works.

Miller first had to deal with numerous legal roadblocks and convince residents of the Sawgrass Players Club and adjoining community that his plans would benefit the surrounding area. He got the OK and also received approval for a 99-year lease of much of the original back nine – 40 acres – to developers of a future assisted living center.

And Miller also needed the King’s endorsement. Miller is friends with PGA Tour commissioner Jay Monahan and asked him if he thought Palmer would support his intentions to transform an 18-hole traditional course to a 15-hole alternative course. Miller wrote a hand-written letter to Palmer that Monahan hand-delivered to the King in Latrobe, Pennsylvania.

Monahan was glad he did.

“In today’s busy world, 18 holes is not always an option for any number of reasons – demands on people’s time, cost, and I think there can be a certain intimidation factor for beginners,” Monahan said. “But with 12-hole courses or par-3 courses becoming a larger part of the landscape, golf can be introduced in a friendly and inviting manner, can be less time prohibitive and more easily allows families and friends to spend time together.

“Facilities like TPC Harding Park in San Francisco, having recently relaunched the public par-30 Fleming 9 Golf Course, and The Yards have embraced the social aspects of the game and offer formats that may ultimately attract a more diverse group of participants, and perhaps some of those introductions will become lifetime players. Either way, these new efforts are overwhelmingly positive for our sport going forward.”

Added Miles: “Time is the No. 1 reason people cite when asked about why they may not play golf as much or take the game up. We want people to have fun here and not get caught up in what’s considered a traditional round of golf.”

Going about the redesign wasn’t traditional, either. Miles showed up one day and saw a bulldozer on the first hole and was told to start shaping a new outlook for the course.

Tapping into his vast golf background as a player, manager and teacher and spurred by his love for the game and architecture, Miles thought of playability, flexibility and diversity when he took a seat in the bulldozer.

“It’s a friendly course,” Miles said. “On the front nine, you can reach water with most every tee shot, but there is plenty of bailout options so you’re not shaking on every tee shot. There is a lot of risk-reward. The greens are big and challenging.

“And the par 3s in the Back Yard offer plenty of fun but will test you.”

Miller put around $10 million into the project. First off, the grounds had to be cleaned up. Then many trees and bulkheads were removed, 29 bunkers were taken out with a few new ones added in strategic places, and the irrigation system was rebuilt. Every green was redesigned – they are large and feature plenty of undulation and head-scratchers. Tees were lengthened that offer plenty of distance possibilities. The par-5, 534-yard sixth has a ridge splitting the fairway, the par-4, 335-yard first can be driven but has a lake guarding the green.

And then there’s the par-3, 179-yard fifth where Miles built a shallow bunker in the middle of the green and had it filled with crushed, black lava. You’ll have fun getting around it if you’re on the wrong side of it, but you actually can putt out of the bunker.

And Miles and Miller took up Monahan’s suggestion to elevate the tee and green on the par-3 11th to resemble short holes from his New England childhood, and the hole is now known as “The Commish.”

“There’s also very little rough. You can walk. This is a user-friendly place and can be played quickly, whether it’s nine or 12 or 15 or 18 holes,” Miles said. “You can play the inner loop in your bare feet if you want and a couple clubs in your hand.

And golf isn’t the only calling card at The Yards. The Oak Bridge Tennis Center is still in full swing, and 12 pickleball courts are being built. The maintenance building will be moved, and its current site will become a party pavilion. The clubhouse features the appetizing 3 Palms Grille that is open to the public and tees up an ideal dining and 19th-hole experience. The outdoor dining areas have been expanded and upgraded with large deck chairs and fire pits that overlook the pond that abuts the inner loop of par 3s. A long teeing area was installed and is perfect for closet-to-the-pin contests, mini-tournaments and outdoor gatherings.

“It’s a social club with a golf course,” Miller said. 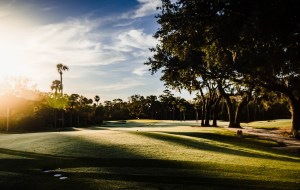 The Yards. (Photo: Courtesy of The Yards)

The Yards is a membership first club and is offering 200 private memberships: $3,000 for a single per year, $4,000 for a couple and $1,000 to add dependents to an individual membership or a couple’s membership. There are also an option for a youth membership at $1,500.

Members pay $20 access and down for greens fees and $15 cart fees per round.

There are also resort and public rates.

“Our focus is fun and reducing the time it takes to enjoy the game,” Miller said. “We saw the Topgolf phenomenon, and our goal was to marry this new, more casual and fun atmosphere with the traditions and existing elements of golf.

“You don’t have to shoot a low score to have fun at The Yards.”

MY FULL GOLF LESSON – WHAT CAN YOU LEARN FROM IT?

11 hours ago 18 Under Par
We use cookies to ensure that we give you the best experience on our website. If you continue to use this site we will assume that you are happy with it.OkPrivacy policy