That’s the approach for Streamsong Resort in Central Florida, which on Thursday will reopen its Red and Blue courses after re-grassing the greens over the summer. The new turf, without any doubt, provides some of the smoothest Bermuda grass surfaces found anywhere.

Named Mach 1, the new grass is an ultra-fine Ultradwarf Bermuda developed by Rod Lingel. Streamsong is the first to install it on 18-hole courses.

“The leaf texture is a little bit better than anything else we’ve seen,” said Streamsong director of agronomy Rusty Mercer after a preview round Tuesday on the Blue. “The inner node length is much shorter and tighter, and when handled properly, the bar gets really high with this. There is virtually no grain associated with the grass, and the ball rolls just phenomenal.”

He wasn’t kidding about the lack of grain, and that’s practically unheard of for Bermuda grass greens, especially in Florida during the summer. Normally the grain of the grass – the direction in which the blades of grass grow, often pointing downhill but sometimes following the setting sun – is as much a factor in reading a putt as is the slope. The grain can force a ball to break more or less on a given slope, and it also effects speed and can cause a ball to bounce.

At the Blue on Tuesday, the grain was zero, zip, nada. Mercer said the greens were rolling at about a 9 on the Stimpmeter for our preview round, and he expects the green speeds to increase to a PGA Tour-like 11 soon as his staff mows them lower. They can surpass even that if the weather dries out during the fall and winter.

This writer has played all his life on Bermuda greens, having grown up in Louisiana and Florida and the past 35 years or so playing golf all around the Sunshine State. It’s not hyperbole to say I have never seen a ball roll more consistently true for 18 holes on Bermuda grass than I did during Tuesday’s round. Think bentgrass smooth – the ball never skips or hops, hugging the ground the entire way.

It’s so smooth, there’s an odd sidenote for my kindred golf geeks: Frequently, if you listen carefully, you can hear a ball skittering across Bermuda grass greens, much like a faint sound of Velcro being pulled. The new Mach 1 greens at Streamsong produce a silent putting surface because the ball never grabs or bounces. It’s akin to a pool ball rolling across a perfect pool table – no sound at all.

It’s so smooth and true, Mercer had to take the resort’s caddie staff onto the course for a lesson on how to read the new surfaces. Otherwise, they might read putts from memory of the older Mini Verde Bermuda surfaces – reads that frequently included the grain. Now, when the caddie says “straight putt,” you’d be wise to believe it.

“It’s strange. We associate grain with Bermuda,” Mercer said. “Maybe that will come with time, I don’t know. But right now, I would just like for people to enjoy it.”

The project started with intentions for the Blue to be resurfaced in 2020 and the Red to come next in 2021.  But then, coronavirus. The resort operators weighed options and decided to re-grass the greens on both courses at once so the resort would be fully operational in 2021 when things hopefully return to normal for travel and golf.

Mercer and his staff also tweaked a few tees on the Red and Blue, adding new boxes to create better yardages, especially for players who tee it up forward on the silver or mixed tee boxes that play between 6,100 and 6,500 yards. The intent is to provide better options for players who struggle to carry the ball past 200 yards on tee shots.

It’s not as if the old Mini Verde green surfaces were especially terrible – they were among the best surfaces in Central Florida, especially for a public-access facility. But it wasn’t good enough for Mercer and his staff.

“We were struggling to provide a good playing surface,” said Mercer, who has been in charge of the turf since before the resort opened the Red and Blue in 2012. “And one of our edicts here at Streamsong from the very beginning, it wasn’t good enough to just be a top Florida golf course, we needed to be a top international golf course.

“The greens had gotten to the point where it became necessary to look at what was next. So, resurfacing them became the answer. We went to great lengths to determine what we wanted to plant. We did a lot of testing, a lot of different plots with different options. At the end of the day, we couldn’t find anything that we felt like was going to be quite as good as this stuff.” 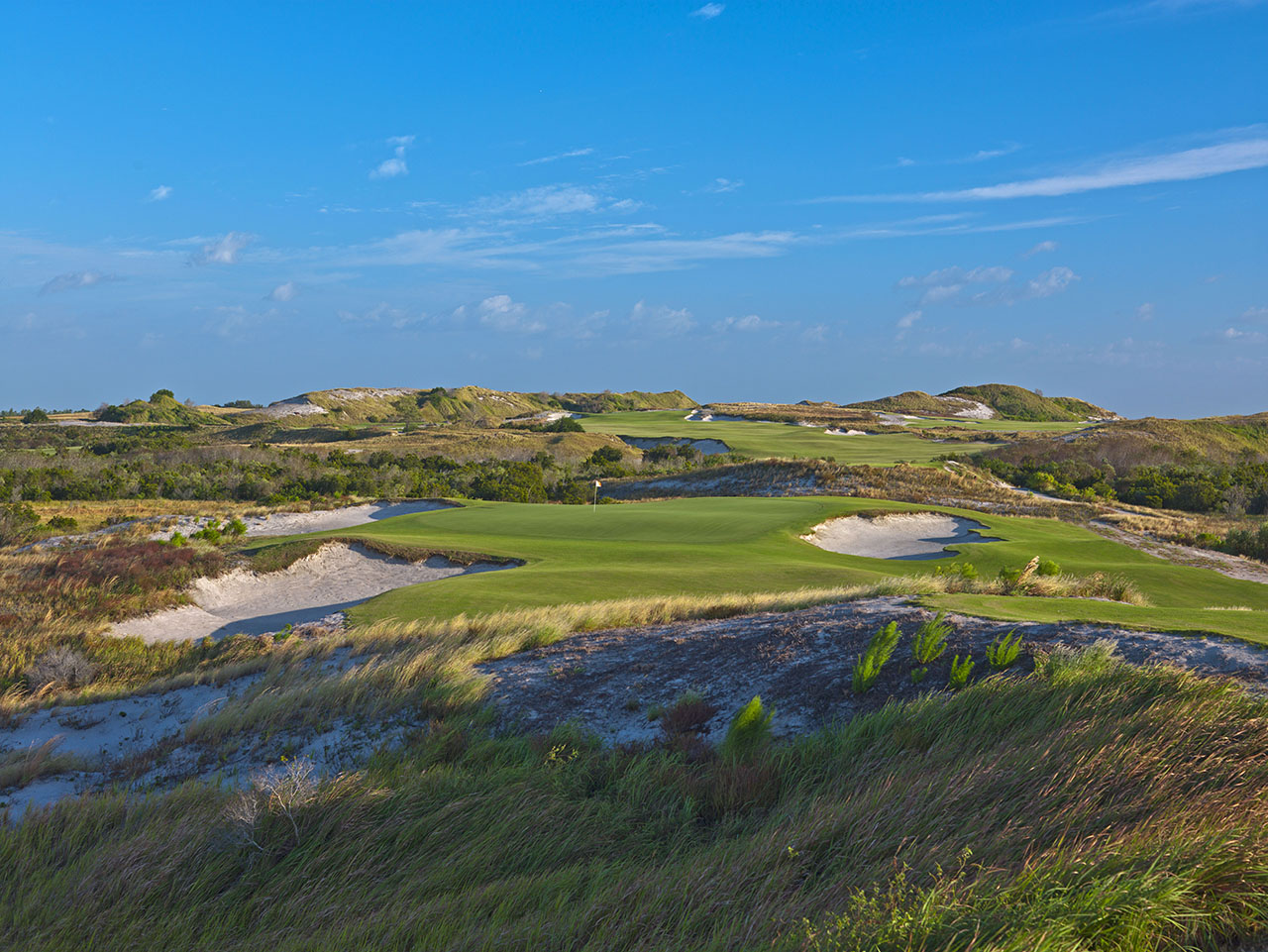 Mercer and his staff had a tough summer of installing the grass. Central Florida had an especially hot and wet summer, and the Mach 1 sprigs were washed out on the Red after several intense storms. With the main season for the resort approaching in the fall and winter, he was under the gun.

There are big expectations for the new greens on the Red and Blue to wow customers. The Red is ranked No. 39 on Golfweek’s Best list for all modern courses built in or after 1960 in the United States, and the Blue is No. 57 on that elite list. The third course at the resort, the Black, came online in 2017 and is ranked No. 46 among all modern courses. The greens were not redone on the newer Black course.

The Red – designed by Bill Coore and Ben Crenshaw – is also ranked No. 2 in Florida on Golfweek’s Best Courses You Can Play list for public-access tracks, trailing only the Stadium Course at TPC Sawgrass. The design team of Gil Hanse and Jim Wagner laid out the Black, which is No. 3 in Florida, and Tom Doak’s Blue is No. 4 on that list.

How did it feel to tear up the old greens on some of the best tracks in the state?

“There certainly was a little bit of nerves,” Mercer said. “But we knew it was necessary.”

Feel good to be done?

“We’ll never be done out here,” he said. “If we’re ever done, it will be time to just go home, because there’s always more work to do.”

Golf Life 19th hole: Stargazing at Streamsong has a view like no other

4 hours ago 18 Under Par
We use cookies to ensure that we give you the best experience on our website. If you continue to use this site we will assume that you are happy with it.OkPrivacy policy