After walking through the unassuming clubhouse, he stepped into the locker room and was stunned to see the names gracing the storage units.

“I know that pretty much everybody who’s anybody has been here,” Thomas said. “Just going through and looking at the nameplates, it’s pretty impressive and unbelievable just the names that are on some of those lockers.”

“The first time I played it, I met Elizabeth Taylor on the 17th tee. And that kind of stuck out because, well, you don’t meet people like that when you are a kid,” said Woods, who later learned he had just missed seeing the late King of Pop, Michael Jackson, who often sat near the 17th hole’s waterfall down by the green.

From the day Shadow Creek opened in 1990, it has been cloaked in mystique and aura and shrouded in secrecy. From its eye-opening price tag — anywhere from $45 million to $60 million — to its location in the Mojave Desert 15 miles north of the Las Vegas Strip, to its esteemed clientele of high-rollers, captains of industry, sports icons and stars of the silver screen, Shadow Creek has been a bucket list dream. One you can play out in reality for $750 a pop, plus the gratuity for the caddie.

The first time the course hit TV screens was in 2018 when Phil Mickelson took down Woods in a $9 million winner-take-all event called The Match. Now the PGA Tour makes its debut this week in the CJ Cup at Shadow Creek. The tournament was relocated from the enchanted Jeju Island in South Korea because of the global COVID-19 pandemic.

“Obviously Shadow Creek is a pretty unbelievable alternative,” said Thomas, the defending champion who headlines a loaded field of 78 that also includes Jon Rahm, Rory McIlroy, Collin Morikawa, Rickie Fowler, Tommy Fleetwood and Jordan Spieth. “It’s definitely not overly difficult, but if it’s set up hard and it gets a little bit firm, then it’s obviously going to play a little bit more challenging. It’s a fun course, it’s scenic and I’m sure the history and the stories are something that even the people who know it all might not even know it all. There’s a lot of things that have gone down here and I’ve had a couple good times here and been able to make a couple of my own memories.”

Revisiting Shadow Creek: Remember when Tiger Woods and Phil Mickelson squared off in The Match?

This transformed plot of hardened desert sprung from the fertile imagination of casino mogul Steve Wynn, who tapped the handiwork of renowned architect Tom Fazio to build a golf masterpiece.

“Steve told me he wanted to build a golf course as good as anything in the world. When I saw the land, I thought he was crazy,” Fazio said. “But whatever I wanted to do, I did.”

What he did was dig 50 feet into the chunk of the earth – about 3 million cubic yards of dirt was excavated. This allowed Fazio to carve out rolling hills and canyons. The massive mining also provided enough dirt to create a berm around the property to help keep the sun out of the players’ eyes.

Some 20,000 of more than 200 varieties of trees were imported and form a lush forest throughout the property that casts shadows over emerald fairways and greens, waterfalls, creeks, ponds, brooks, lagoons and lakes. The woods are so thick, no hole can be seen from another.

The unique environment also is home to lively vegetation; vibrant, multihued floral decorations; and exotic birds including swans and blue herons, pheasants with 6-foot tails, as well as rabbits and other critters. 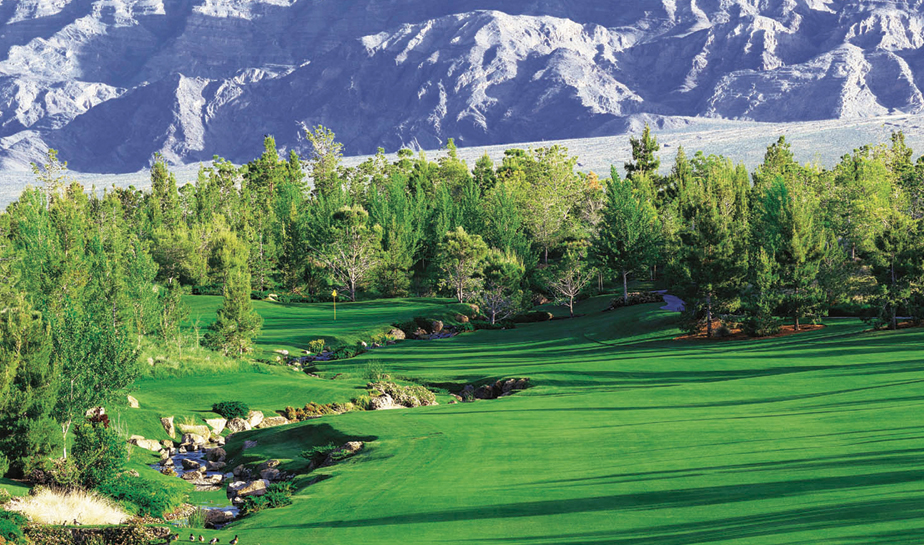 There’s even a red London telephone booth on the ninth tee. Englishman Justin Rose was knocked for a loop the first time he saw it this week. The course shocked him, too.

“I’ve been blown away by the golf course, think it’s absolutely fantastic,” the 2013 U.S. Open winner said. “I knew Shadow was kind of a prestigious course here. I expected it to be more of a resort golf course, if I’m honest – a little wider, a little easier – and I was blown away by the conditioning of it. To have firm, bentgrass greens in the heat is just unbelievable. They’re the best greens I’ve played on outside of Augusta and potentially Muirfield Village. By far the best greens that I’ve seen on Tour.”

After an expensive renovation in 2006 that sand-capped the course, lengthened it and expanded some greens for more pin placements, the par-72 layout can tip out at 7,560 yards.

“I was very wowed by Shadow Creek the first time I played it, and I’ve played it a few times since and you’re still stunned,” three-time major winner Spieth said. “Just an unbelievable experience, one of the top ones I’ve ever had in the country.

“I like the mixture of holes. You have drivable par-4s and then you have long doglegs. The green complexes are complicated and very challenging. You can score on the course, but it also presents a legitimate challenge.”

Four-time major winner Rory McIlroy saw Shadow Creek for the first time this week. He was impressed to the point of wishing he’d get here more often.

“Everyone else that’s probably come in here before me is probably singing its praises. It’s such a cool place, it’s a great golf course,” he said. “I wouldn’t mind if we got to play a Tour event here every year. It’s really cool.”

World No. 1 Dustin Johnson out of CJ Cup at Shadow Creek after positive COVID-19 test

15 hours ago 18 Under Par
We use cookies to ensure that we give you the best experience on our website. If you continue to use this site we will assume that you are happy with it.OkPrivacy policy