Give or take a DeChambeau drive, it’s about 3,750 miles from the town of St. Andrews in the Kingdom of Fife to the village of Pinehurst in the sandhills of North Carolina. But what distance separates, golf connects.

St. Andrews and Pinehurst are often mentioned in the same breath as homes of the game in the Old World and the New, respectively, not least because both places don’t just embrace golf but rather seem to have grown organically around its finest canvases.

The village of Pinehurst is dominated by its eponymous resort, which can now boast more golf courses than Elizabeth Taylor could ex-husbands. There are nine standard courses, all numbered, and the most celebrated – the Richard Burton, if you like – is No. 2. It has hosted three U.S. Opens, a U.S. Women’s Open, a U.S. Senior Open, a PGA Championship, a Ryder Cup and three U.S. Amateurs. There isn’t another venue in golf that owns such a glittering resume.

When I first visited No. 2 about 15 years ago, much of its strategic charm was buried beneath sod. Its fairways were wall-to-wall grass, generous enough to land an aircraft without disturbing a pine cone. What little it demanded of players off the tee, it made up for around the famously crowned greens, where someone with a stonemason’s touch might ping-pong hither and yon for some time. To wit: A friend once shot an ignominious round of 121 at No. 2. With one ball!

A long season of change at Pinehurst began a decade ago, when No. 2 was restored by Bill Coore and Ben Crenshaw. The duo ripped out 35 acres of turf, leaving native areas dotted with grass and scrub that not only returned long-lost playing angles to the old masterpiece but gave it back real character and authenticity too. You’ll still find almost every wayward shot out there – trust me on this – but No. 2’s demands off the tee are considerably more thoughtful and exacting than they once were.

Pinehurst No. 4, recently redesigned by Gil Hanse and Jim Wagner (Courtesy of Pinehurst)

For my money, No. 2 is No. 2 only to Pacific Dunes among the finest publicly accessible golf courses in America. The U.S. Open returns here in 2024, marking its fourth staging in a quarter-century in Pinehurst.

The rebirth of No. 2 was a springboard for greater change at Pinehurst, a subtle shift that firmly consigned the era of stiff collars and upper lips to the photos adorning the walls and ushered in a more mellow mien. The ambience of the resort and the golf options it offers are much more relaxed these days, to the point of being kid-friendly (if you’re into that sort of thing).

Two years after the new No. 2 was unveiled, Thistle Dhu opened. It’s an 18-hole putting course right by the clubhouse, inspired by the famed Himalayas course in St. Andrews. Two years after that, in 2014, the resort purchased a nearby Jack Nicklaus course called National Golf Club, which became No. 9 for members and guests.

But Pinehurst still suffered the same burden as many other fine resorts –Kiawah Island and Sea Island, to name but two – in that the drop-off in quality between its premier golf course and its other layouts was precipitous. Pinehurst’s second-best was considered No. 4, which had been touched by more designers than a supermodel, all the way back to Donald Ross his ownself. What existed a few years ago was a Tom Fazio design that was popular but unspectacular.

So Pinehurst hired Gil Hanse and gave him a bulldozer. Both did fine work.

What exists today is unrecognizable from what was there previously. No. 4 shares only a number and a footprint with its predecessors, and today suggests more the native, sandy look of No. 2 than the parkland vibe of the old Fazio effort (though its contours are considerably more helpful than those of its more feted neighbor). A year after reopening, No. 4 co-hosted the ’19 U.S. Amateur with No. 2.

It was not Hanse’s only mark on Pinehurst.

In 2017, Hanse created the Cradle, presumably so named because it will rock you. Located by the clubhouse and right next to Thistle Dhu, it’s a 9-hole adventure, with holes ranging in length from 56 yards to 126 yards. All you need to navigate the Cradle is a putter, a couple of wedges and a thirst for entertainment. On any given day, the Cradle is peopled with more than a few aspiring golfers who are still years away from being old enough to tackle the more storied course around the corner of the clubhouse. Fees are $50, replays are free and kids under 17 play free when accompanied by a paying adult. The Cradle is as chill as golf gets, and in a town long known for a more formal bearing, it might be the best use of 10 acres in the game. 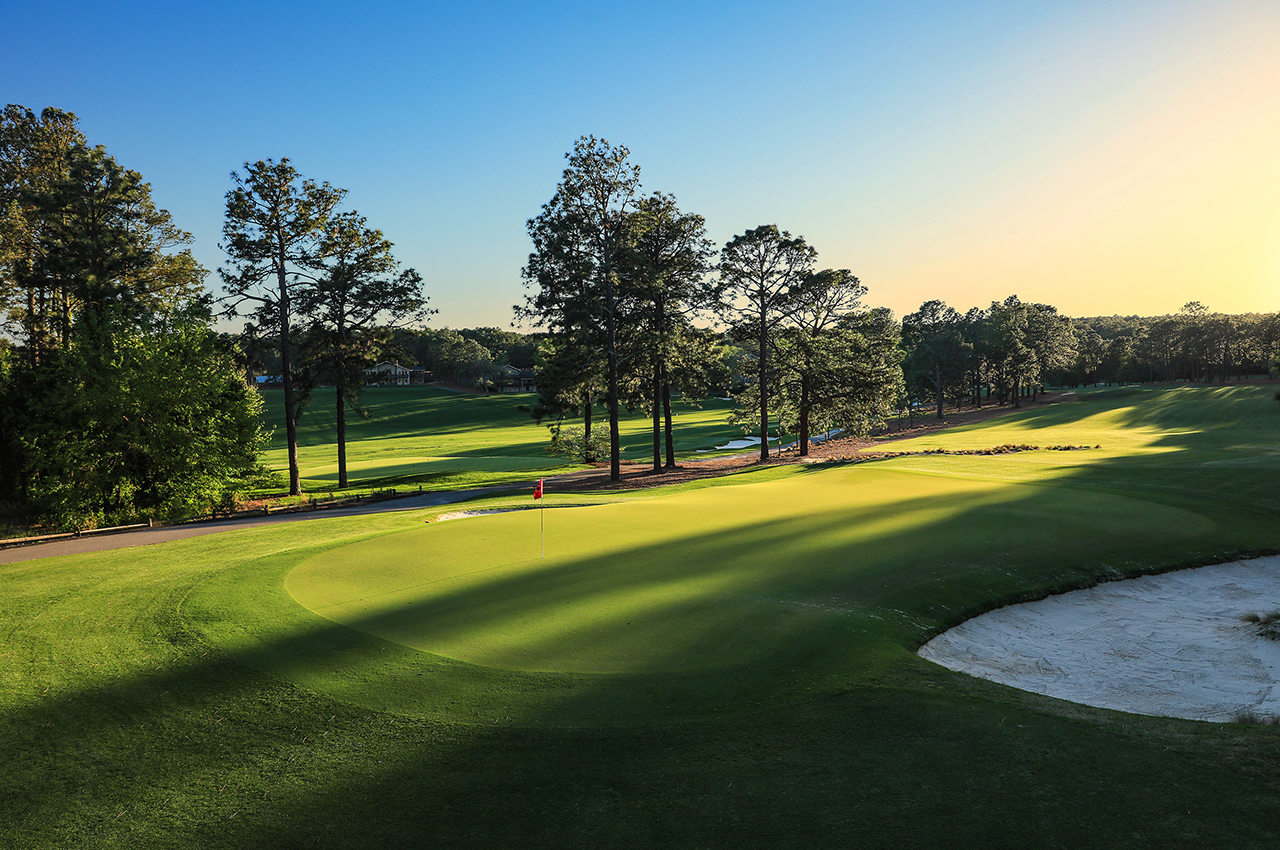 There is more to Pinehurst than the behemoth resort. A few miles away is Pine Needles, another Donald Ross course, long owned by the late Hall of Fame teacher Peggy Kirk Bell, whose family still runs the place. Pine Needles and its sister course, Mid-Pines, were both restored in recent years by Kyle Franz, who cut his teeth working on projects like Pacific Dunes in Oregon, Barnbougle Dunes in Australia and, closer to home, the No. 2 restoration.

Pine Needles recaptures every tease of Ross’s imagination, tumbling over heaving terrain with every hole beautifully framed amid the pines. Its green complexes are the equal of most any you’ll find. Adding to the thrill ride: Pine Needles offers Finn Cycles, sporty two-wheeled motorized scooters that carry both bag and player. They might not clean your clubs, but nor do they give you a bad yardage or mock your misreads, plus after 18 holes you dismount feeling like Steve McQueen. 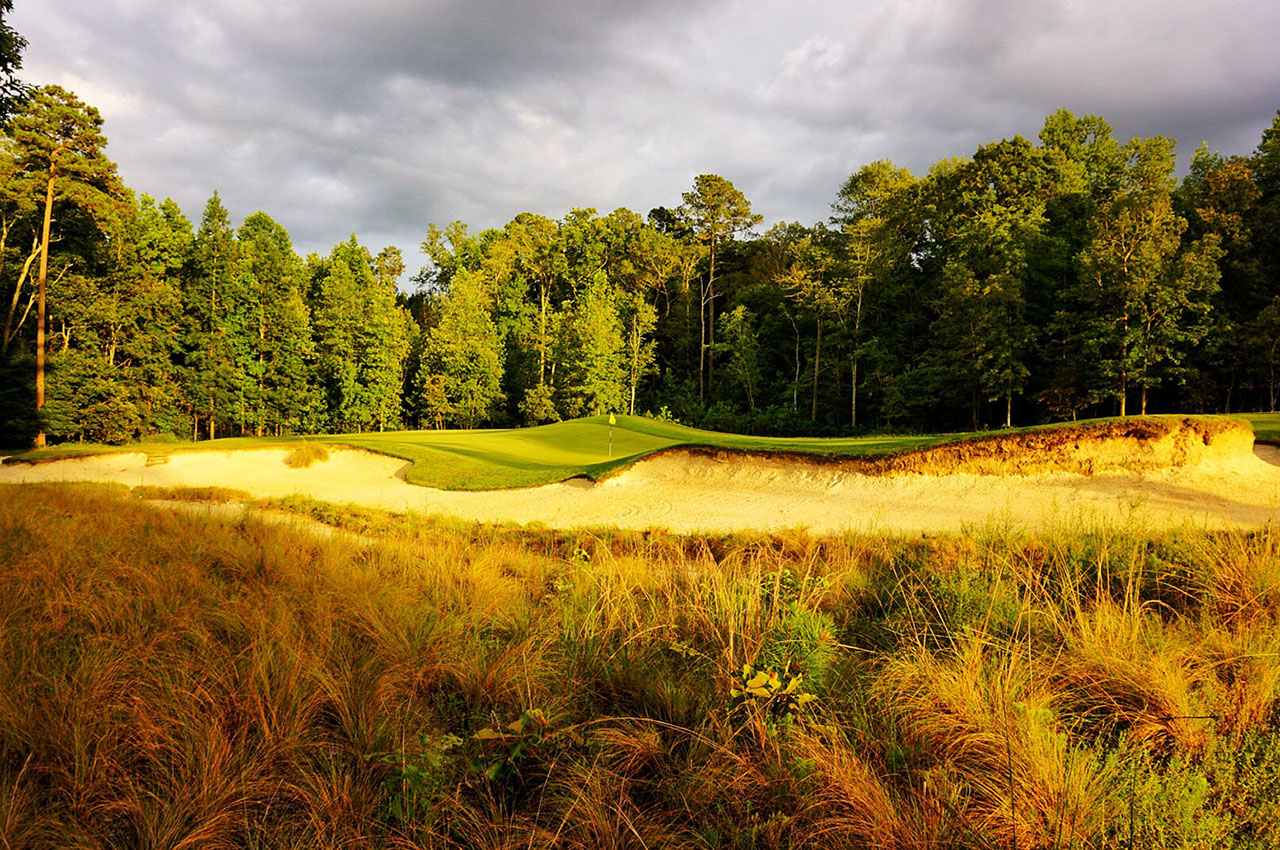 Just as there are dozens of fine courses within range of the Old in St. Andrews, the sandhills too offers more options than most travelers have days to spend. One I am loath to pass up is Tobacco Road, located in Sanford, halfway between Pinehurst and the airport in Raleigh. Arguably the most polarizing course in America, Tobacco Road is a wildly engrossing design by the late architect Mike Strantz. It has its share of blind shots – some of them on putts – but there is not a single dull shot among its 18 incredibly varied holes. It is well worth a detour.

What ultimately connects Pinehurst and St. Andrews is not simply history but evolution, the fact that they are living museums to this ancient game. Both are grounded in old sepia images of dour Scots and gentlemen golfers, but each has in its own way adapted to ever-changing challenges, audiences and eras. And that’s perhaps the most impressive accomplishment evident now in Pinehurst: that so much has been added, while nothing has been lost.

How did the USGA decide on moving to Pinehurst? It started last summer at the U.S. Am

Rules of Golf explained: Does my hole-in-one count?

12 hours ago 18 Under Par
We use cookies to ensure that we give you the best experience on our website. If you continue to use this site we will assume that you are happy with it.OkPrivacy policy