The club was established in 1899 with 75 members and was home to the aforementioned log-cabin clubhouse, a nine-hole layout and tennis courts. The club moved to a second location a few miles north for a few years and then in 1919, the club upgraded to its permeant home in central Phoenix. The golf course was designed by Harry Collis and featured oiled sand greens, once a staple of golf in certain areas of the country like Texas and Oklahoma.

Five-term Arizona Senator and 1964 Republican Presidential candidate Barry Goldwater was once an influential member. His brother, Bob, is recognized by many as the father of the Phoenix Open.

“I thought the idea of a golf tournament in Phoenix in the winter would be an ideal way to bring awareness to Phoenix,” he once said.

That golf tournament started in 1932 with the inaugural Phoenix Open, which was won by Ralph Guldahl, who captured two U.S Opens and the 1939 Masters.

Ralph Guldahl, who has a Masters title to his credit, won the first Phoenix Open in 1932 at Phoenix Country Club. Photo by Golfweek

But in its heyday, Phoenix Country Club did just fine bringing in fans, with the Phoenix Open celebrity pro-am being a huge draw.

Bob Hope, Lawrence Welk, Jerry Lewis and Tennessee Ernie Ford were among those who participated. Hope came for several pro-ams but would only participate if certain travel arrangements were met.

“Bob Goldwater was a pilot, he had a small plane,” Phoenix Country Club History Week Chairman and club member John Spensieri said. “He would have to go pick up Bob Hope.”

It was one of the many ways Goldwater personally recruited celebrities and golfers to the event. 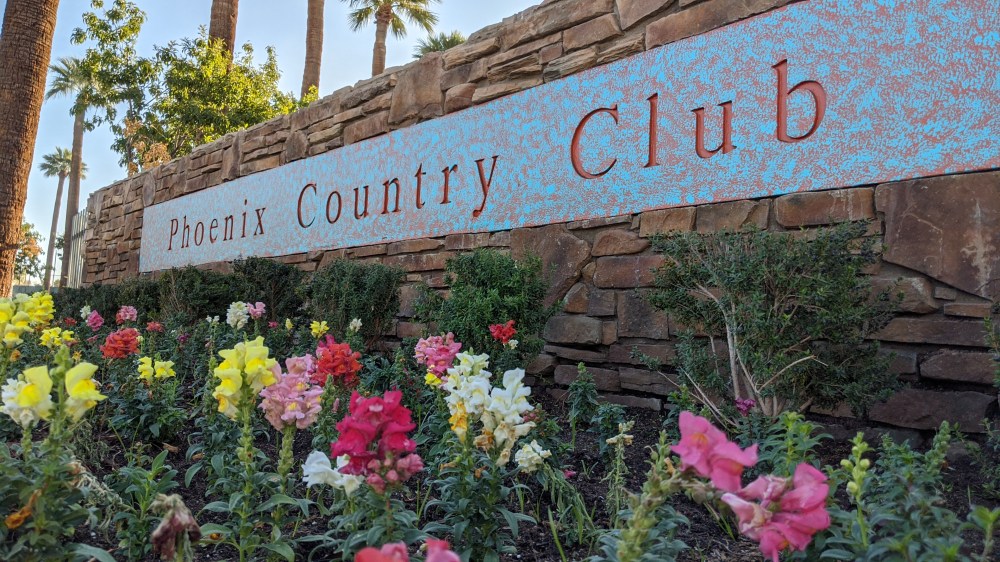 In 2011, Nicklaus wrote a letter to the club and sent it along with a replica of the Macgregor wood that he used when won the tournament in 1964. In the letter, Nicklaus noted that it was his debut appearance in the event in 1962 that sparked a lifelong rivalry and friendship with Arnold Palmer.

“I finished runner up to Arnold Palmer,” Nicklaus wrote. “He only nipped me by 12 shots.” The letter and the wood are among the dozens of pieces of memorabilia encased in cabinets in the clubhouse. 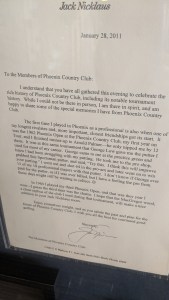 A letter written by Jack Nicklaus to Phoenix Country Club in 2011. The letter and a replica Macgregor wood donated by Nicklaus are part of the memorabilia collection in the clubhouse. Photo by Golfweek

Nicklaus’s win in 1964 was his lone Phoenix Open triumph but it ended a three-year run of Palmer winning the event.

Now home to the PGA Tour Champions Charles Schwab Cup Championship, the course is a parkland-style layout situated in the heart of the city. The course was redesigned in 2002 by Tom Lehman and John Fought.

It was recently made longer but not solely to make for more of a challenge for the tour pros.

“We really lengthened it because of the new members that we have,” Spensieri said. “We have 57 members here, including women, that are 3 handicap to plus 6 handicap. Those are some really good players and they hit the ball a very long way. They needed the length. We wanted to keep it interesting for them.”

In 2012, the club started History Week, and it’s become an annual celebration of the club’s history. Each year, a past champion is invited back. Members gather for a dinner and a fireside chat.

“In 2016, at the end of the History Week celebration for Lanny Wadkins,” Spensieri said, “the Tour came to us and said ‘Would you guys think about hosting the Charles Schwab Cup Championship?’”

The next year, the Schwab Cup made the move to Phoenix Country Club, eight years after discussions first started at the club to bring a pro golf event back.

And what of the greens that were once made of sand that was soaked in oil and smoothed by the flat end of a rake by a golfer before he made his putt? They’ve come a long way. No less than World Golf Hall of Famer Ernie Els gave them his seal of approval.

“The greens staff has done a fabulous job,” said Els, who played the course for the first time this week. “These are some of the best greens we’ve seen all year.”

Who’s in, who’s out, what you need to know about PGA Tour Champions stop in Phoenix

Golf has surged in 2020, but nothing beats the ‘Tiger Woods Effect’

Rules of Golf explained: I accidentally kicked my ball on the green – is it a penalty?

17 hours ago 18 Under Par
We use cookies to ensure that we give you the best experience on our website. If you continue to use this site we will assume that you are happy with it.OkPrivacy policy