Well, not always. No. 10 at Riviera Country Club is one of the classic short holes in golf, confounding the PGA Tour’s best each year in the Genesis Invitational. It seems as though it should be an easy birdie for Tour pros, but disaster is always lurking.

Besides having hosted the Genesis – formerly the Los Angeles Open – for 57 years, Riviera has been the site of three men’s majors: the 1948 U.S. Open (Ben Hogan won), the 1983 PGA Championship (Hal Sutton) and the 1995 PGA Championship (Steve Elkington). With challenges like No. 10, it’s no wonder the majors were won by some of the premium ballstrikers of their eras. Adam Scott – another premier swinger of the club – won the Genesis Invitational last year.

Riviera was designed by George C. Thomas Jr. and William P. Bell, and it ranks No. 18 on Golfweek’s Best list of Classic Courses built before 1960 in the United States. It opened in 1927 when golf balls didn’t fly anywhere near as far as they do these days, and while the challenges at No. 10 have changed a bit over the years, the hole is no less daunting just because of the short overall length. Simply put, this hole is in the players’ heads.

Thanks to several maps provided by Puttview – the maker of detailed yardage books for more 30,000 courses around the world – we can see exactly the challenges that face the players this week. The Puttview books include topographic maps of the green that show the surfaces in detail, and the pages for No. 10 at Riviera are packed with trouble. 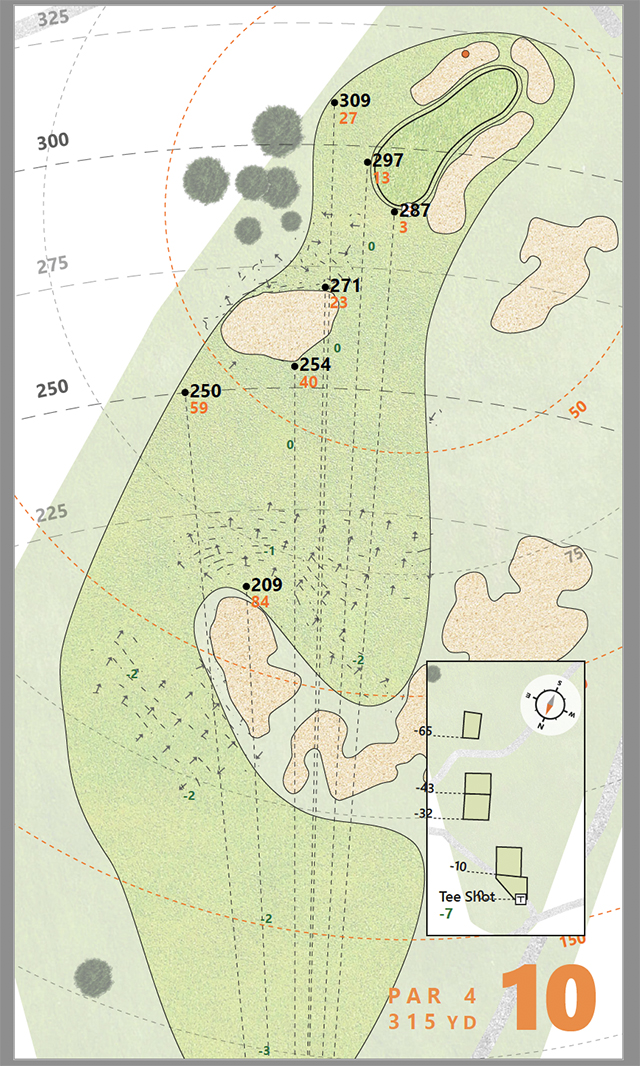 Puttview’s fairway map of No. 10 at Riviera Country Club shows the yardages to carry the fairway traps. It’s 271 yards over the left bunker to set up a pitch onto the green. (Courtesy of Puttview.com)

The 315-yard, par-4 10th is easily in reach for most Tour players swinging driver or even 3-wood, but the green is a tiny sliver sloping dramatically front to back and angled from front left to back right. Three greenside bunkers are anything but easy escapes, as players frequently blast from one sand trap to another – great fun to watch, terrifying if you’re on the leaderboard.

Players face a choice off the tee: lay up short of a fairway bunker on the left that’s 254 yards away from the tee to set up a longer wedge shot with more spin, or send it flying 271 yards over the trap to hopefully set up a shorter pitch straight up the length of the green. But a cluster of trees guards the left landing area in the rough, and those greenside traps are always in play. 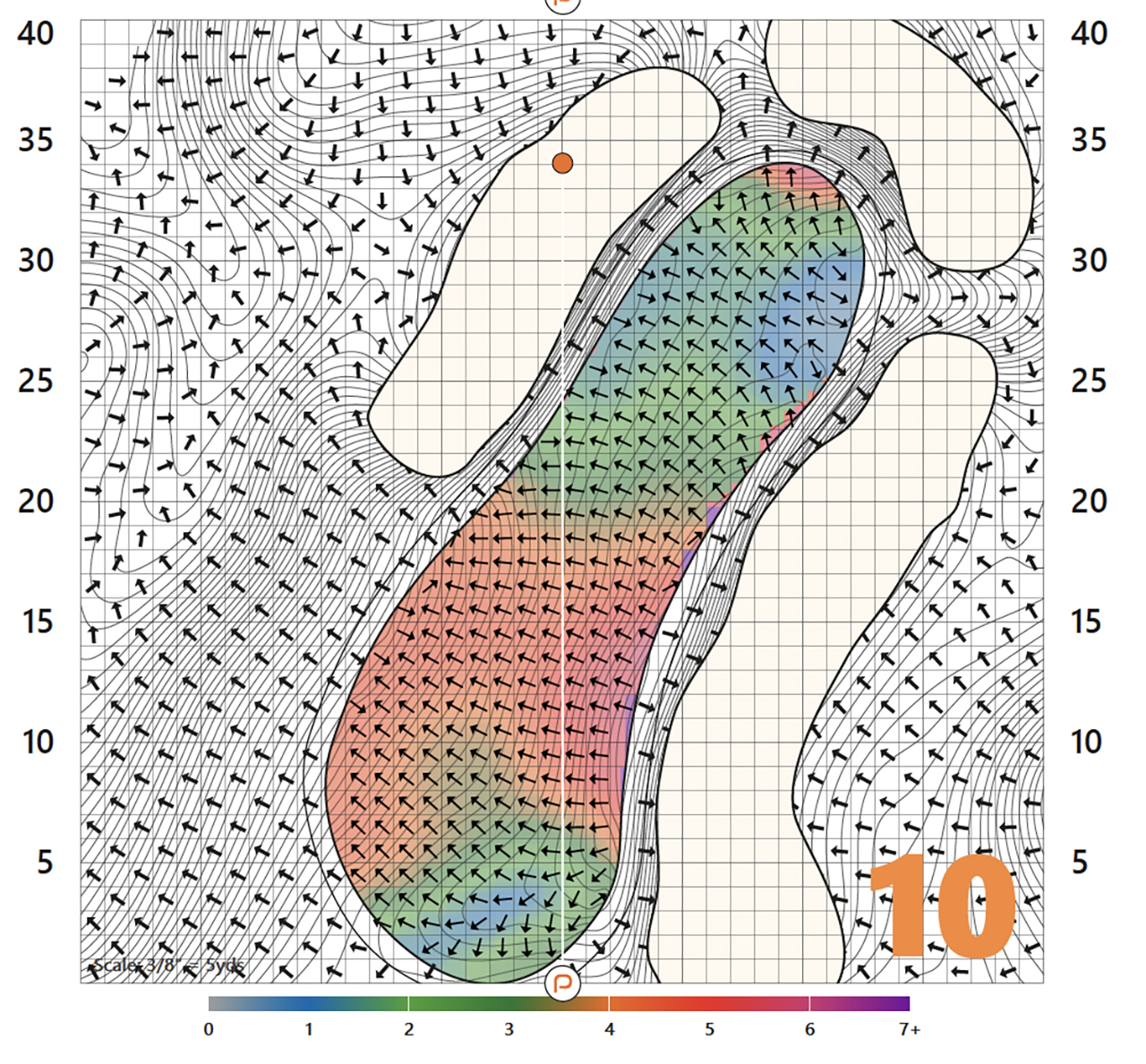 Puttview’s heat map of No. 10 at Riviera Country Club shows the green sloping toward the back, with the greatest undulation marked in red across the front-left portion of the putting surface. The internal arrows indicate the slopes. The numbers on the outside of the map show the depth of the green in yards. (Courtesy of Puttview.com)

There’s a chance to drive it onto the front left of the green 287 yards off the tee, but it’s also entirely common to watch a tee ball skip over the green and into a tough spot. When the pin is in the back right of the green, long and left – facing a pitch over the back bunker – is no place to be.

It’s not uncommon to see players run their approach shots across the green or come up short and see the ball trickle back down the greenside slopes – assuming they have missed the bunkers. All in all, it’s one of the trickiest short approach shots in golf.

Good luck tomorrow guys. Will miss competing with you this week, but I look forward to seeing you at Riv. Watch out for #10. https://t.co/0WIoyyi03T

How do the pros plan to play it this week in the Genesis? Check out their responses:

“I’ll try to hit it. Not really go for it because I don’t think I’m ever trying to hit it on the green because it’s almost impossible to do that, but yeah, I try to get it up green-high left.”

“Statistically, as my dad made aware to me, I’m not very good from 50 to 125 yards. I would not be laying up on that hole. That would leave me about 50 to 125 yards in. So I will be going for it like I have every other year and kind of rely on getting up and down and a couple good bounces here and there. The 10th is a special hole here, it’s a key hole for the tournament and it can kind of either make or break your week.” 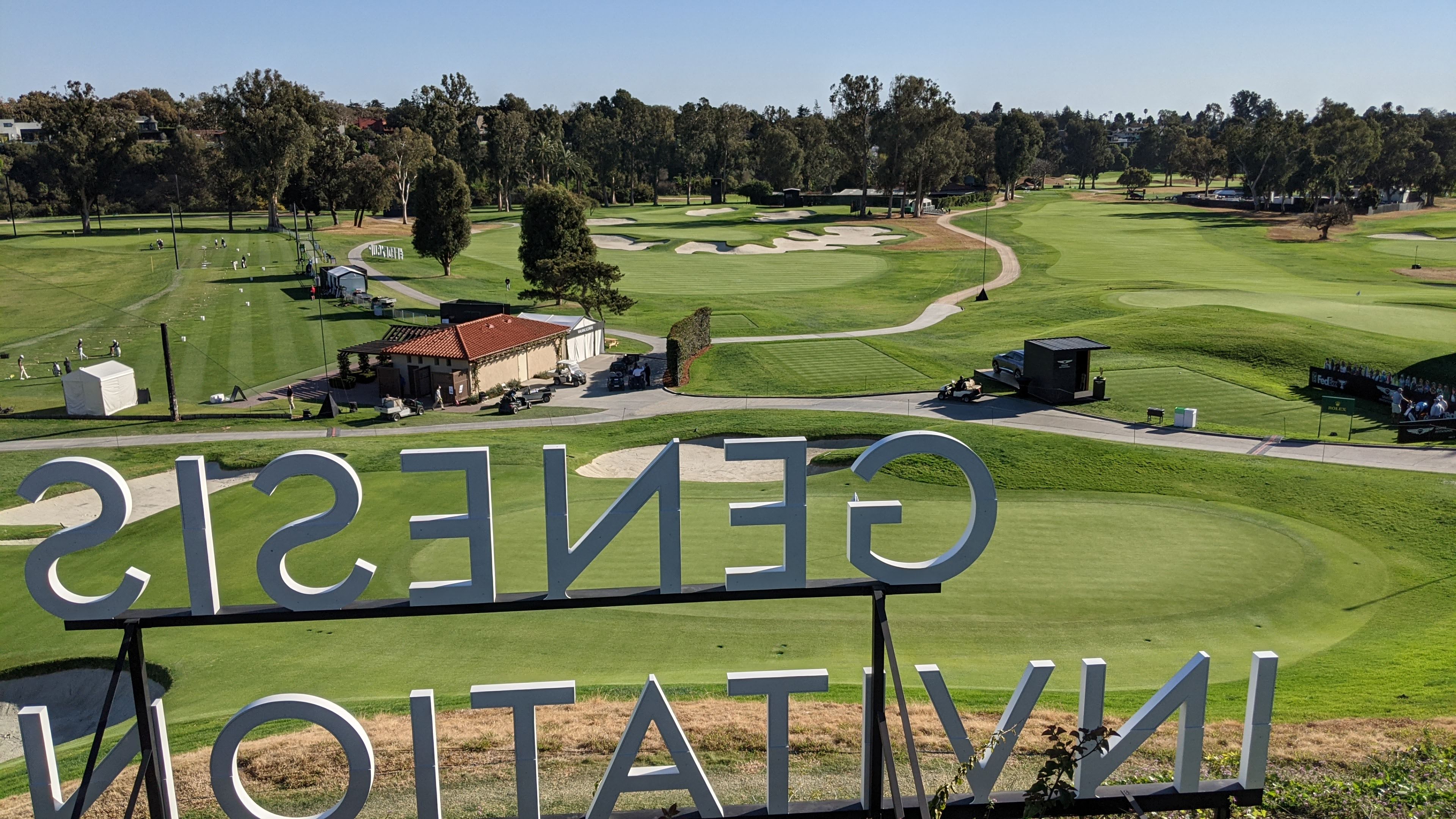 “I think pretty much generally the strategy there now is to move it down as far as you can to kind of the front left of the green. Obviously hitting a 3-wood, it’s hard to control exactly where it’s going to finish, or driver, but I think that’s generally the best play.

“The green is so narrow and this week it’s so firm, I certainly don’t want to leave myself a 90-yard pitch. There’s probably very little chance of hitting the green actually, so then you get into that bunker situation. So get it down near the front left.

“It could only be conditions or wind or something that would change that strategy I think for me. You’ve just got to get it down there, roll the dice a little bit. If you hit a hell of a shot and it ends up on the green, then that’s great. Otherwise, just start working at scrambling from around the green. Sometimes you have to chip it from 30 feet, that’s the best you can do.”

22 hours ago 18 Under Par
We use cookies to ensure that we give you the best experience on our website. If you continue to use this site we will assume that you are happy with it.OkPrivacy policy