As a group, golfers are rarely satisfied. They always want to hit the ball farther off the tee, hit their approach shots closer to the hole, sink more putts and shoot lower scores.

Working with a good custom fitter can ensure you have the ideal clubs to match your swing, and taking lessons from a PGA of America professional can improve your skills. But when it comes to playing the game itself better, things get a little fuzzy.

For years, Arccos has refined its shot-tracking system to help golfers learn not only how far they hit each club in their bags, but also what areas of their games are strengths and which could use some work. The Arccos screw-in tabs that affix to clubs have gotten smaller, and their battery life has improved. Several grip options are now available with Arccos tags built-in, and most Cobra and Ping clubs come standard with Arccos-enabled grips. But the release of the Arccos Caddie Strokes Gained Analytics system within the Arccos Caddie app could turn out to be the company’s most powerful tool yet.

Pros on the PGA Tour have nearly every shot they hit tracked by laser-guided measuring devices. That data has been used to create strokes gained statistics that show, very accurately, how much of an advantage or disadvantage a golfer has over the average player from various distances. Now that level of detail is available for amateurs.

By harnessing the power of a database that includes over 300 million shots and more than 4.5 million rounds, Arcoss allows you to compare your performance to players of any handicap from plus-4 to 20.

For example, my handicap over my last 21 Arccos-tracked rounds is 13.7, and I would like to lower it to 10. According to Arccos Caddie Strokes Gained Analytics, over my last five rounds I have played 5.6 shots worse than a 10-handicap golfer (Hey, practice time is hard to come by when you’ve got kids and are in a pandemic!). The good news is I’ve been 0.8 shots better than a typical 10-handicap player at putting, but the bad news is I’ve been 3.5 shots worse on approach shots.

Arccos Caddie Strokes Gained Analytics shows that while my putting is better than the typical 10-handicap golfer, my approach shots are worse. (Arccos)

That is good to know, but the system reveals things on a more granular level too. Arccos Caddie Strokes Gained Analytics showed that shots from 150 to 200 yards are not my problem (-0.2) and that the distance range that hurts me most is 100-150 yards. I’m 2.2 shots worse than a 10-handicap golfer in that range, so that’s the specific area that I should practice most. It also showed that my most-common miss on approach shots is short (46 percent), but I rarely miss long (10 percent), so I should take a longer club more often. 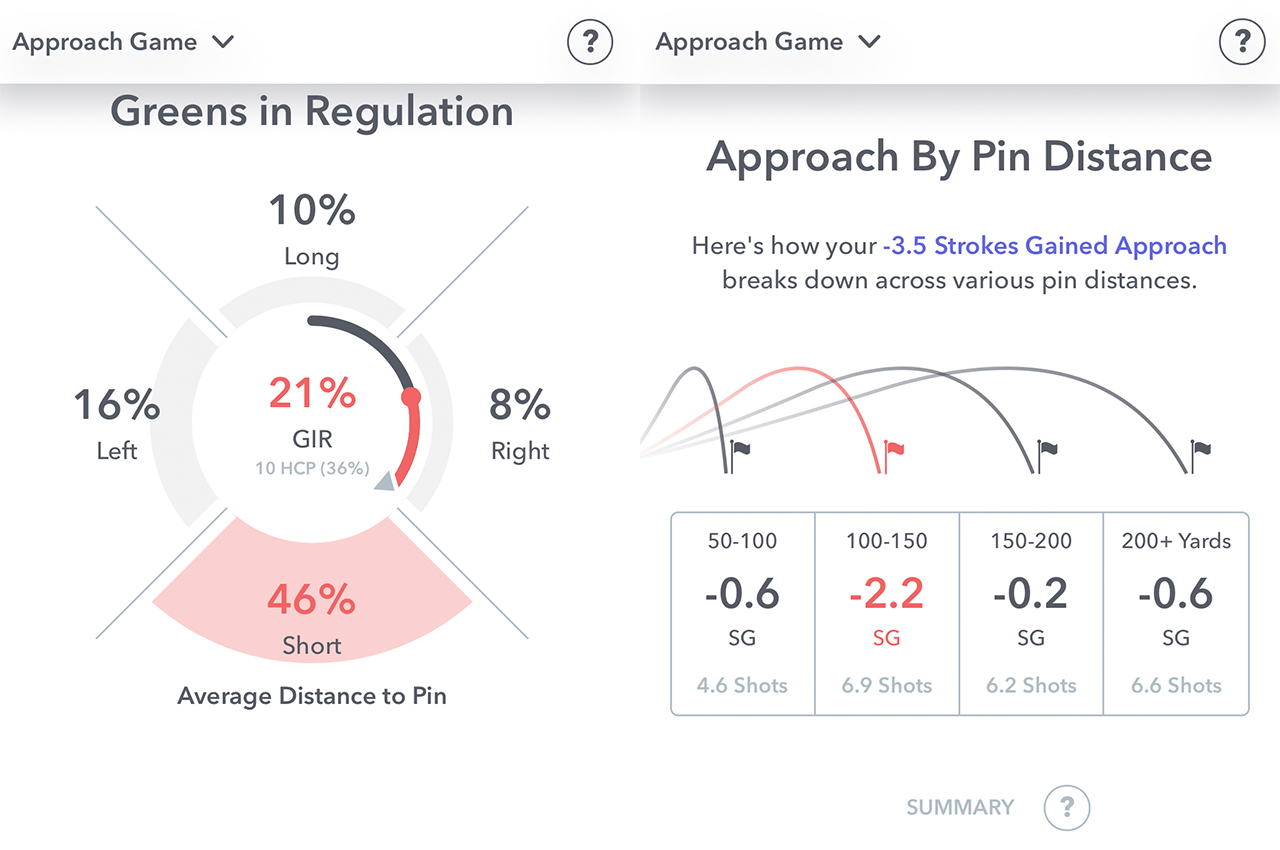 Arccos Caddie Strokes Gained Analytics shows I tend to miss approach shots short and my performance from 100 to 150 yards from the hole is more than two shots worse than a 10-handicap golfer. (Arccos)

Off the tee, the system shows your accuracy, left and right miss percentages and even your performance on straight, dogleg left and dogleg right holes. In the short-game section, you get a breakdown by distance, performance from sand and average leave distance to the hole. You can see how you compare on putts from various distances, three-putt percentage, putts per green in regulation and more in the putting section.

Arccos Caddie Strokes Gained Analytics is part of the Arccos Caddie smartphone app and is sold as a subscription. The first year is included with the purchase of the sensors that screw into your clubs or smart grips. The price of each subsequent year’s subscription is $99.99.

Golf Fitness ROTATION & SEPARATION Exercises – ALL YOU NEED IS A GOLF CLUB!

14 HANDICAP GOLFER RIPS UP the 5th OLDEST GOLF course in THE WORLD!

7 hours ago 18 Under Par
We use cookies to ensure that we give you the best experience on our website. If you continue to use this site we will assume that you are happy with it.OkPrivacy policy